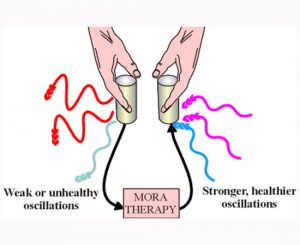 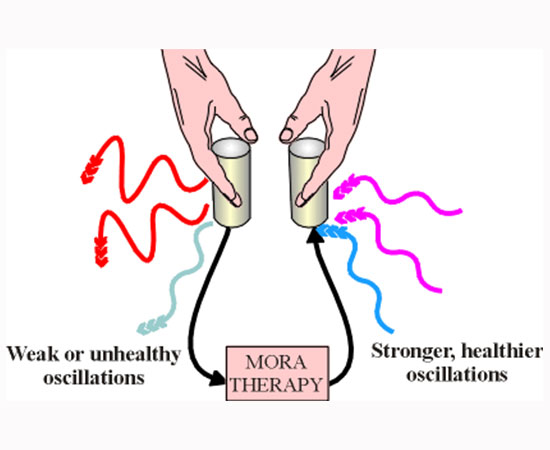 MORA therapy is based on a well-known principle in physical science, that a wave form of a particular frequency can be cancelled by inverting the wave form and feeding it back to the original system. When this principle was applied to the human body, it was found that biological frequencies or resonances could be measured and inverted. In fact, the MORA device has the ability to separate the harmonious (or normal, physiological) from the disharmonious (or disease-related) frequencies, selectively invert the disharmonious frequencies and feed these back to the body in a positive, harmonious form. In other words, MORA therapy treats the body not with an external electrical stimulation or physical force, drug, or other foreign influence, but with its own oscillations in their optimally healthy form.

MORA therapy can be applied in several valuable ways. A basic application is through hand or foot electrodes, and probes can also direct the electromagnetic current to acupuncture points to regulate or balance the condition of specific meridians or organ systems. Treatment can be given with inverted oscillations from bodily fluids, such as blood or urine, as in treating an auto-immune disorder. Another exciting option is the inversion of the oscillations of food and other allergens, environmental toxins and micro-organisms. Through repetition of such treatment, the body’s internal electromagnetic environment is altered, so that it is no longer supportive of the micro-organism or allergic sensitivity factor.

Some cases of the European physicians regularly using electrodermal screening and MORA therapy can be cited for illustration:

A 49-year-old businessman suffered from chronic sinusitis, emphysema and bronchitis, anxiety, heart and circulation problems, including high blood pressure and rapid heart rate. His blood pressure was measured to be 210/110 and his pulse was 112 beats per minute. After basic MORA therapy, most measurement values on electrodermal acupuncture meridian testing were regulated. When MORA therapy was applied through probes at acupuncture treatment points for two of the dysregulated meridians, the measurement values came to normal. The patient spontaneously declared a sudden feeling of well-being, the blood pressure check showed 160/92 and the pulse was 80 per minute. The patient stated that he could breathe well through his nose, and that he was calm and relaxed.

A 69-year-old woman suffered from eczema throughout the body, particularly on the hands and feet. Electrodermal allergy testing determined a strong milk allergy. Basic MORA therapy was combined with allergy therapy, consisting of inverted frequencies of milk, cheese, yogurt and cream samples held in a brass vessel, connected to the input of the device during therapy. Two weeks later, after four therapy sessions and total avoidance of milk products, the eczema disappeared.

A 33-year-old businessman had a viral infection, which resulted in facial nerve pain concentrated behind the right eye. Pain medication was unsuccessful. He additionally suffered from nausea and vertigo, was constantly tired and listless and occassionally depressed. After one standard MORA therapy session, his pain disappeared and his mood dramatically improved.

An 8-year-old boy was hyperactive, restless, and fidgety, disobedient and destructive. He was unwilling to take medications and could not even settle down enough to be measured on the acupuncture meridian test points. He was, however, willing to hold the hand electrodes for the MORA therapy. After a series of treatments, he was transformed into a pleasant, obedient child, without any fidgeting or other signs of hyperactivity.